Tom Hanks is comparing and contrasting the coronavirus symptoms he experienced with the effects his wife Rita Wilson felt while battling through the novel virus.

Opening up to The Guardian about his bout with the virus, the “Sully” star said that enduring the symptoms while far away from home — he was in Australia at the time — was a bit odd considering Hanks and Wilson, both 63, experienced different symptoms back in March when they each tested positive.

“Our discomfort because of the virus was pretty much done in two weeks and we had very different reactions, and that was odd,” Hanks said. “My wife lost her sense of taste and smell, she had severe nausea, she had a much higher fever than I did. I just had crippling body aches, I was very fatigued all the time and I couldn’t concentrate on anything for more than about 12 minutes.”

Hanks added: “That last bit is kinda like my natural state anyway,” before saying he remained “pretty calm” about the situation.

The Oscar winner said he had concerns about his diagnosis but said their lack of rising body temperatures gave him hope they would come out OK on the other side.

“When we were in the hospital, I said: ‘I’m 63, I have type 2 diabetes, I had a stent in my heart — am I a red flag case?’ But as long as our temperatures did not spike, and our lungs did not fill up with something that looked like pneumonia, they were not worried,” he said. “I’m not one who wakes up in the morning wondering if I’m going to see the end of the day or not. I’m pretty calm about that.”

The pair appeared even-keeled when they announced their positive diagnoses back in March; in his chat with the outlet, Hanks admonished those who still opt not to wear face masks.

“There’s really only three things everyone needs to do: wear a mask, social distance, wash your hands,” Hanks said. “I know societally it’s been politicized, but I don’t get it, man. I don’t understand how anyone can put their foot down and say: ‘I don’t have to do my part.'”

Last week while making press rounds for his upcoming film “Greyhound,” which will debut July 10 on Apple+, Hanks once again called on mask detractors to “do your part.”

“Those things are so simple, so easy, if anybody cannot find it in themselves to practice those three very basic things – I just think shame on you,” he said. “Don’t be a p—-, get on with it, do your part. It’s very basic. If you’re driving a car, you don’t go too fast, you use your turn signal and you avoid hitting pedestrians. My Lord, it’s common sense.”

The “Cast Away” star also said at the time that he and Wilson were the “canaries in the coal mine for the COVID-19 experience,” as they seemingly became the first famous faces to go public about contracting the virus. 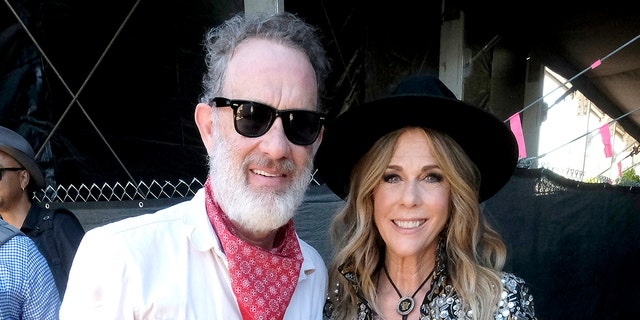 “We had about 10 days of very uncomfortable symptoms. Not life-threatening, we’re happy to say,” Hanks explained. “We were isolated in order to keep an eye on ourselves because if our temperatures had spiked, if our lungs had filled, if any number of things had gone wrong with this, we would have needed expert medical care. We didn’t.”

Hanks added: “I guess we were model recoverers from COVID-19, but we were also isolated so that we would not give it to anybody else that we came in contact with and since then have been doing the same — isolating, social distancing that is being asked of the world so, we are fine.”