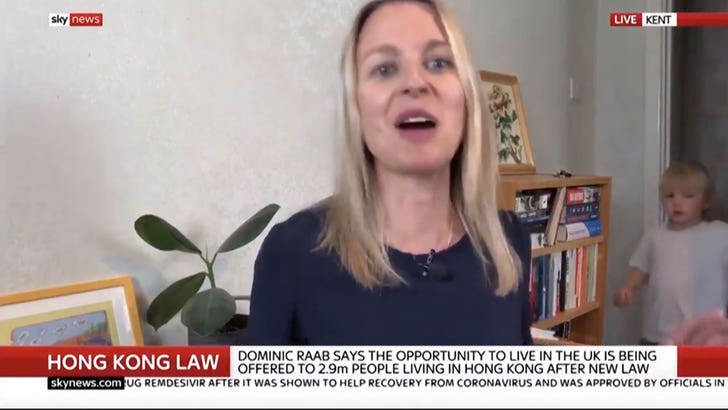 A British journalist reporting live from home got yanked back into the field of family life during her broadcast — and it’s freakin’ adorable … even if the anchor didn’t think so.

Sky News’ foreign affairs editor, Deborah Haynes, was live on the air Wednesday with presenter Mark Austin — and they were talking shop about a new law across the pond that’ll allow millions of people in Hong Kong to — y’know what, let’s just get to Deborah’s cute kid.

Her young son — who can’t be more than 5 — storms into the room she’s doing her live shot from … and saunters over to bring something of the utmost importance to her attention — biscuits. Highest priority!!!

Deborah handled the situation as gracefully as she could, excusing herself from the chat for a moment to address her boy’s pressing concerns … namely, if he could have 3 biscuits.

She haggled and gave him the okay for 2 — but by then, the camera had cut back to Mark in the studio and he was already moving on, seemingly irritated by the interruption. He kept it relatively chill too though, saying that’s what happens when reporting amid a lockdown.

Of course, that phenomenon isn’t specific to coronavirus or WFH, per se — and the Brits oughta know that first-hand. This reminds us of another very famous/very funny kid-trusion a few years back that happened live on the BBC, before COVID-19 was running rampant.

American professor Robert Kelly was doing a live shot from home to dish on South Korean policy, when his own two young children sashayed into the room … only to have his wife fly in after them and yank them out.

Deb’s sitter must’ve been busy with the tea downstairs or something here.