The actress was married to Frank Gifford from 1986 until he died in 2015. Their marriage hit a rough patch in 1997, when he was caught red-handed in an illicit affair with a married flight attendant named Suzen Johnson. Gifford and her husband, a former New York Giant and sports commentator, managed to patch things up and remained married.

However, Gifford recently told People in an interview that getting through the scandal was one of the hardest things she’s ever had to do and noted that Philbin did everything he could to shield her public persona from even more scrutiny. 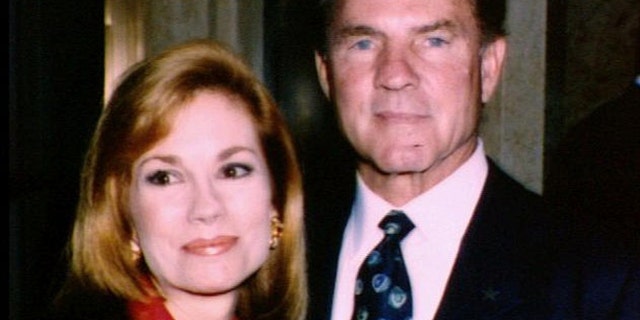 “Everybody talks about the hard times that I went through that were public. And they were hard times. By any definition, they were the most painful times of my life, for sure,” Gifford, 66, told the magazine.

“But I always knew Regis had my back. He always protected me on the air. The Bible says, ‘You will know the truth, and the truth will set you free.’ I knew my own truth. I was never going to let what the world said about me define me,” she added. “And he always supported me in all of that.”

Gifford paid tribute to Philbin, who died last week at age 88, on Instagram, shortly after news of his death became public. She also appeared for an interview on the “Today” show in which she recalled the last time she saw him.

“I was just so grateful the Lord gave me that final time,” Gifford said of their last meeting at her Greenwich, Conn., home. “And it was so precious because when I talked to Joy the day that I found out right after he had passed, she said, ‘Kathie he hadn’t laughed in a long, long time.’ She said, ‘I was so worried about him.'”

“I think he was like Frank. He was just ready, you know? … And she said, ‘The day that we came to have lunch with you was the last time I heard him laugh.’ That will forever be a precious gift the Lord gave me, that I got to laugh again with one of my best friends in all my lifetime.”

Philbin and Gifford co-hosted the daytime talk show from 1985 to 2000.