Plunging her bare hands into bags full of compost, submerging her sparkling sapphire and diamond engagement ring, the Duchess of Cambridge shows that she’s not afraid of a bit of dirt in these remarkably candid photographs, taken as she helped create a new garden for a children’s hospice.

Kneeling on the ground, she ploughs on with the task in hand despite great clumps of soil pouring on to her floral midi dress. Then she doles out sunflower seeds to the children to plant.

It could so easily have been a sombre occasion, given the tough hand dealt to the children here, yet Kate laughed joyfully alongside six-year-old Sonny Pope-Saunders, who has a rare type of brain tumour, and his siblings, all beaming with delight.

‘What a big mess!’ said the Duchess, smiling as her new tan £135 Russell and Bromley wedges took a thorough dusting. As they planted the seeds, Kate revealed that her children, George, six, Charlotte, five, and Louis, two, are having a sunflower-growing competition. ‘Louis is winning so George is a little grumpy about that,’ she said 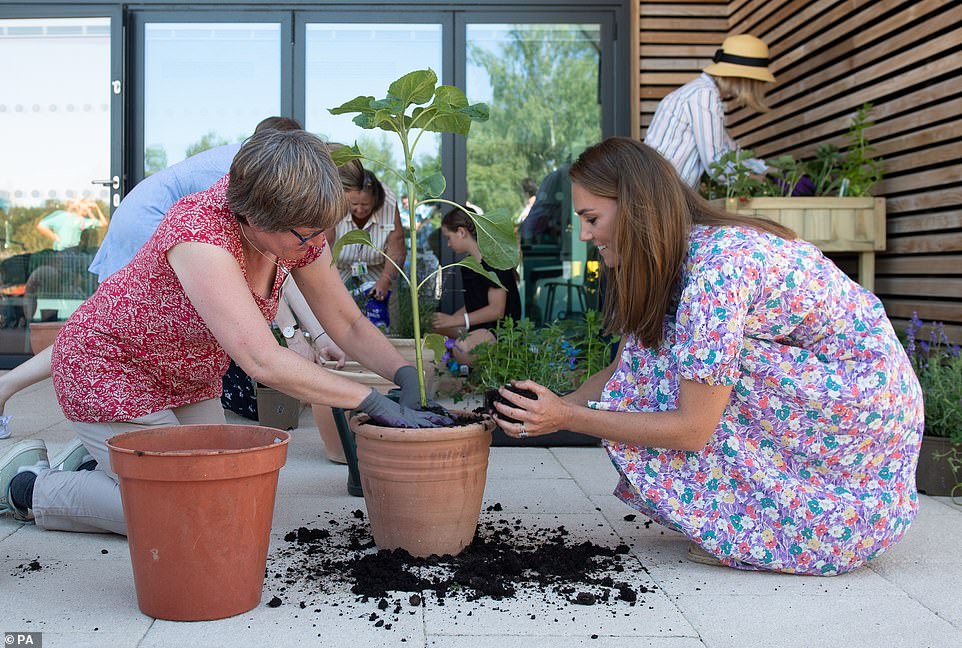 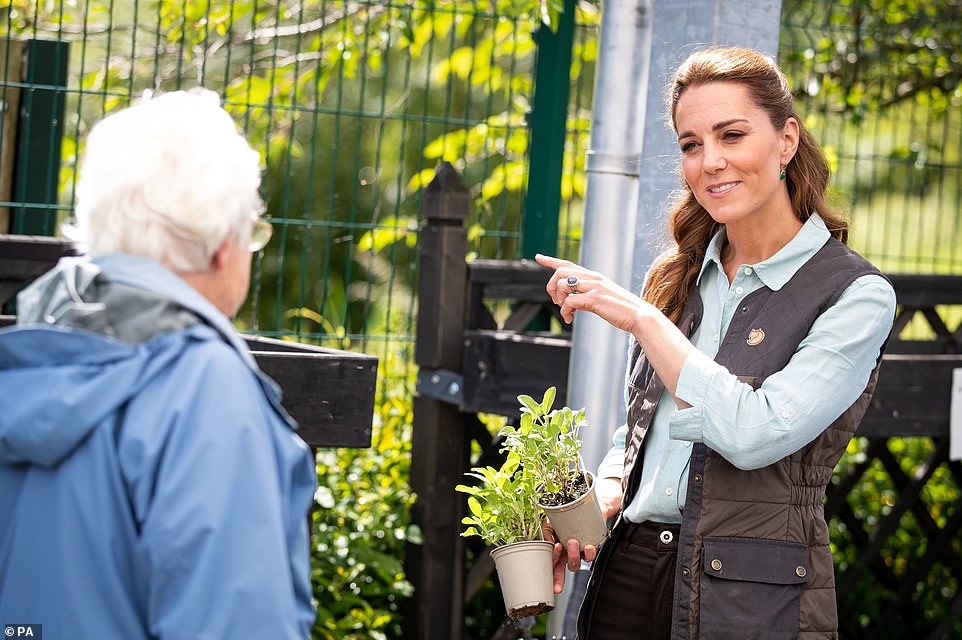 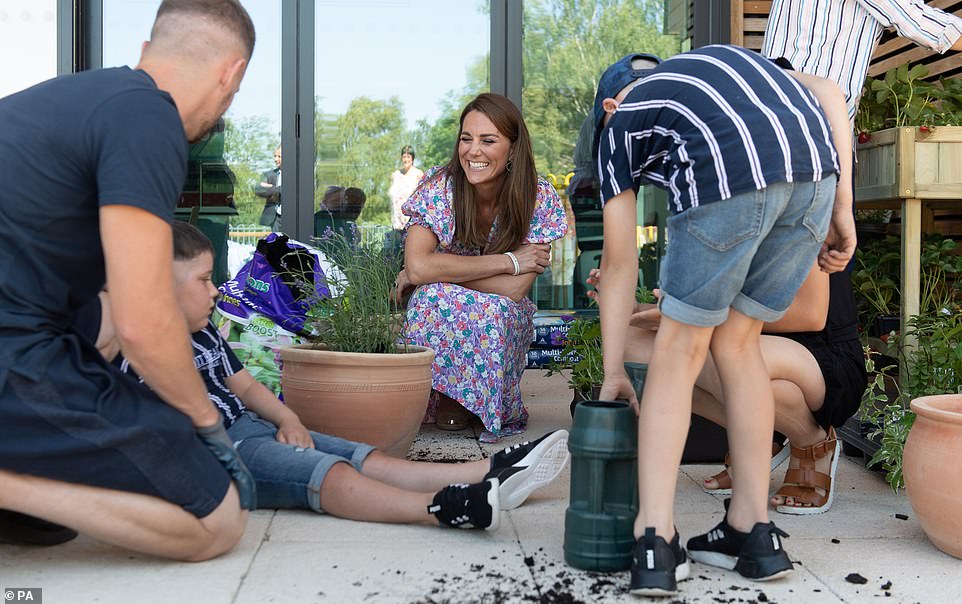 She talks with Sonny Saunders (seated left), his father, Jordan, and his brother, Hudson (back to camera, right) during the visit on Thursday 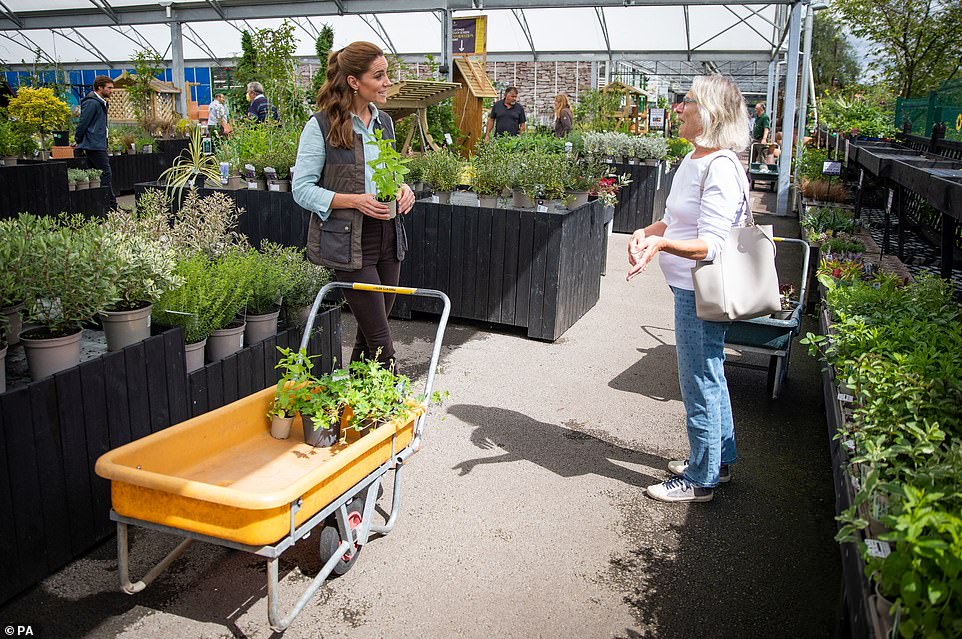 When she shops for plants and herbs at Fakenham Garden Centre in Norfolk, Kate talks with a member of the public

This was Kate’s way of marking Children’s Hospice Week, which ends today: planting strawberries, sunflowers, lavender (her favourite), geraniums and herbs, all thoughtfully selected to awaken the senses.

Even the Duchess’s £180 dress, the first she has worn from Indonesian-based ethical company Faithfull the Brand, perfectly suited the occasion.

Kate’s focus has increasingly turned towards the environment – a passion she shares with the Prince of Wales, and which she has also expressed by helping to create a garden at the Chelsea Flower Show.

Until quite recently, Kate has publicly revealed little about herself, following the Queen’s example. But while she has always been one for quietly getting on with things, at 38, she has found a new purpose and confidence in the role of Queen-in-waiting.

She has become increasingly adept at navigating the tightrope between maintaining a Royal mystique and meeting the expectations of a celebrity-driven world to share intimate details of her life.

Kate uses personal experience to advance the causes she cares for. She has championed mental health issues, setting up Heads Together with her husband to tackle stigma, and has focussed on issues of parenthood and childhood. 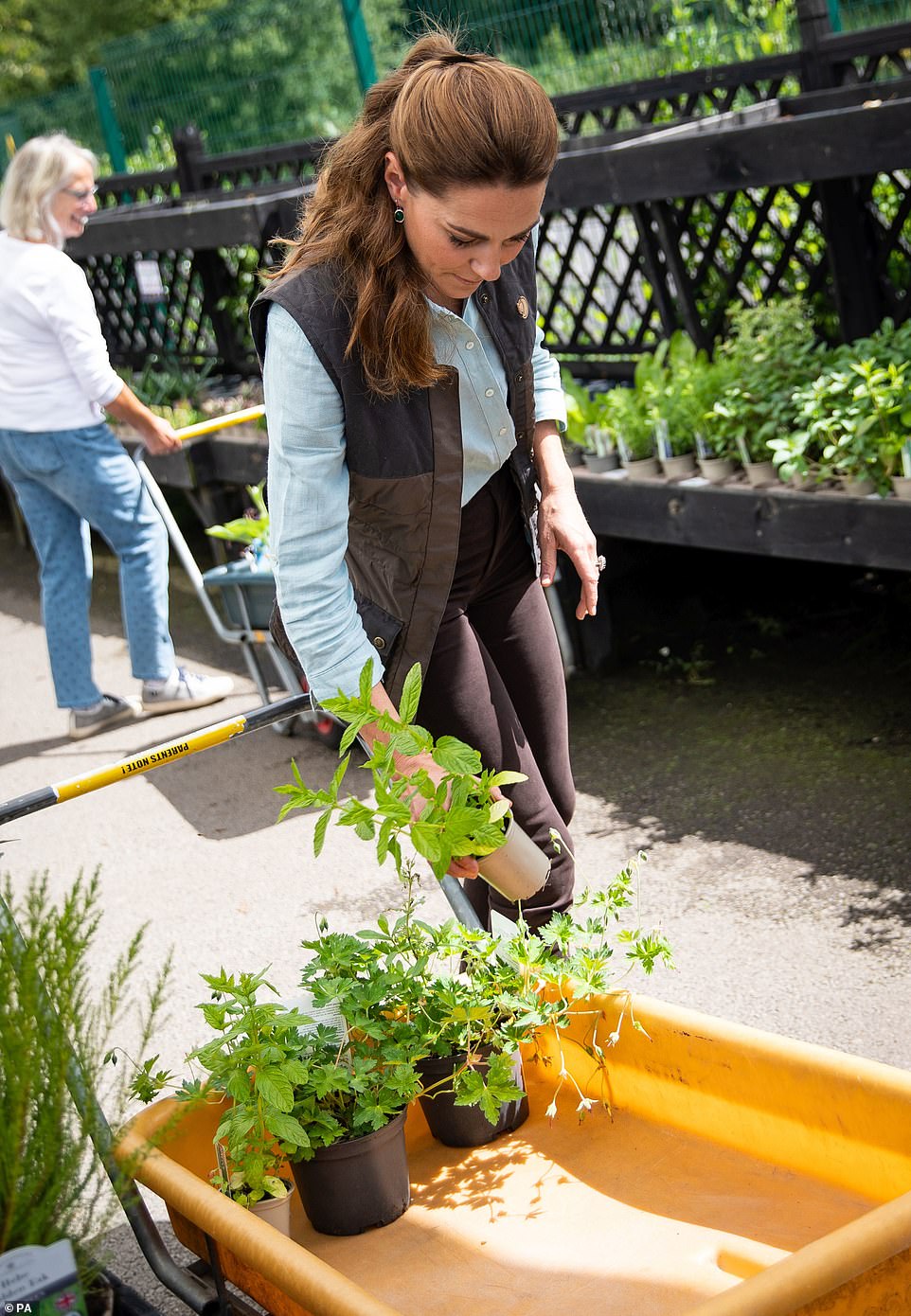 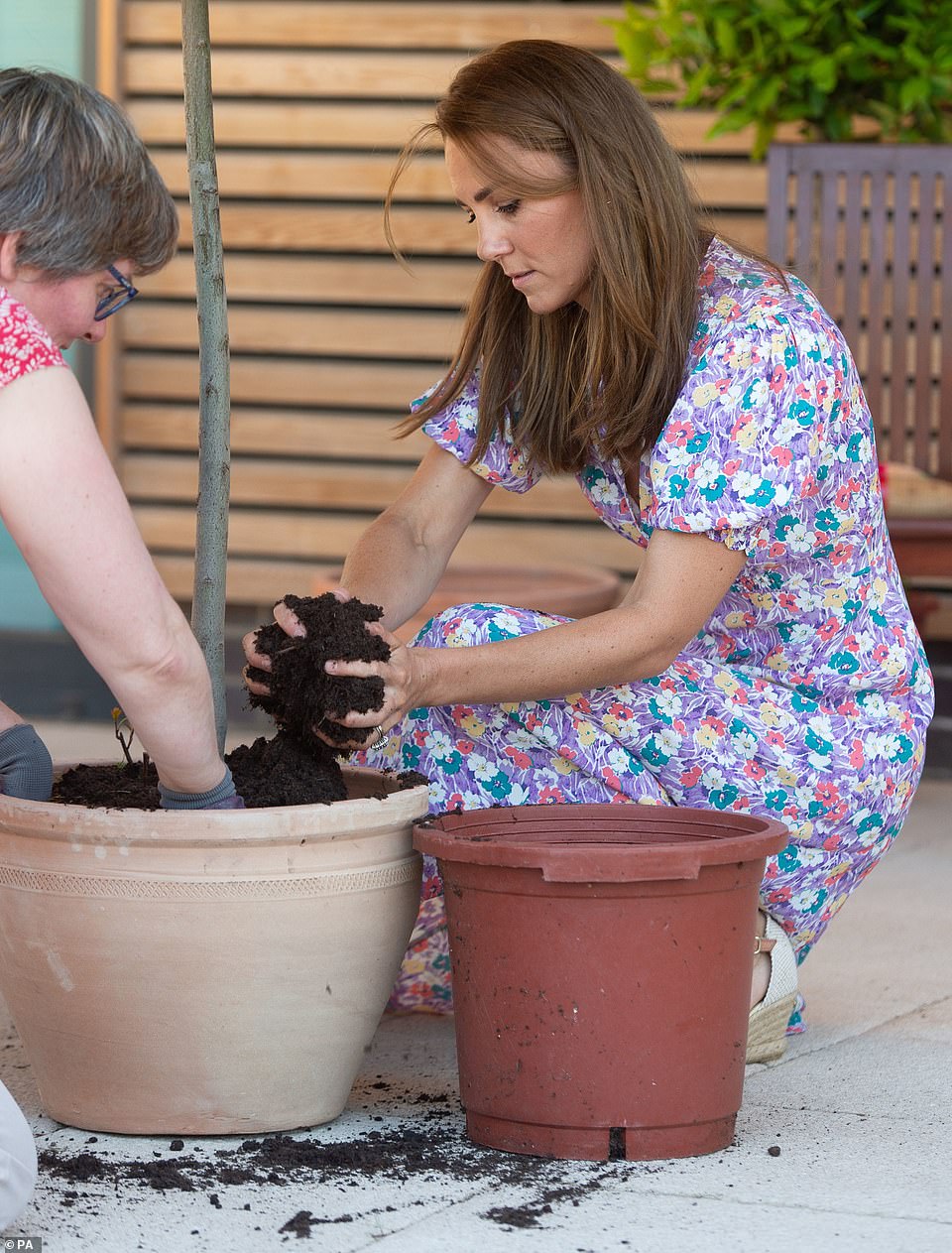 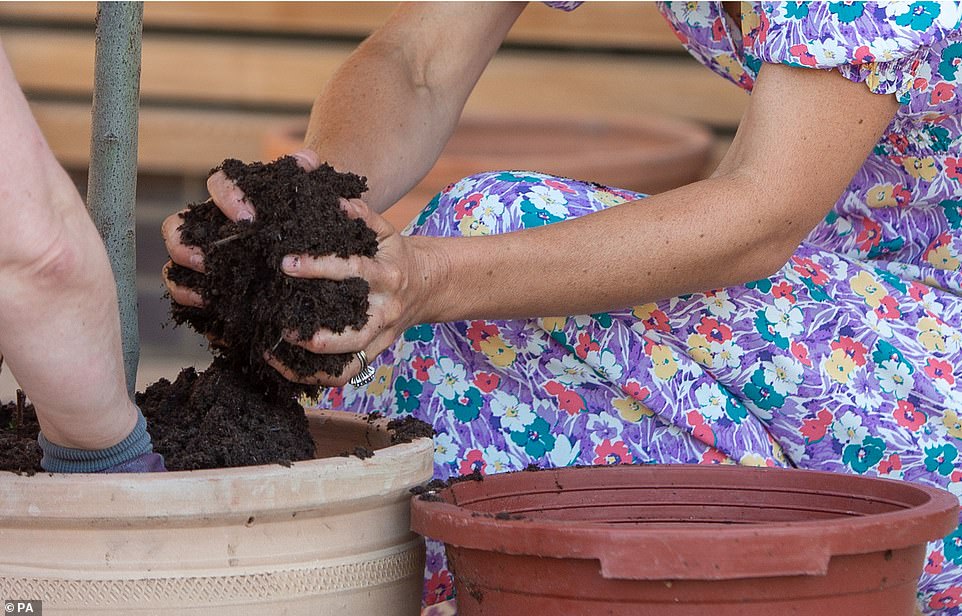 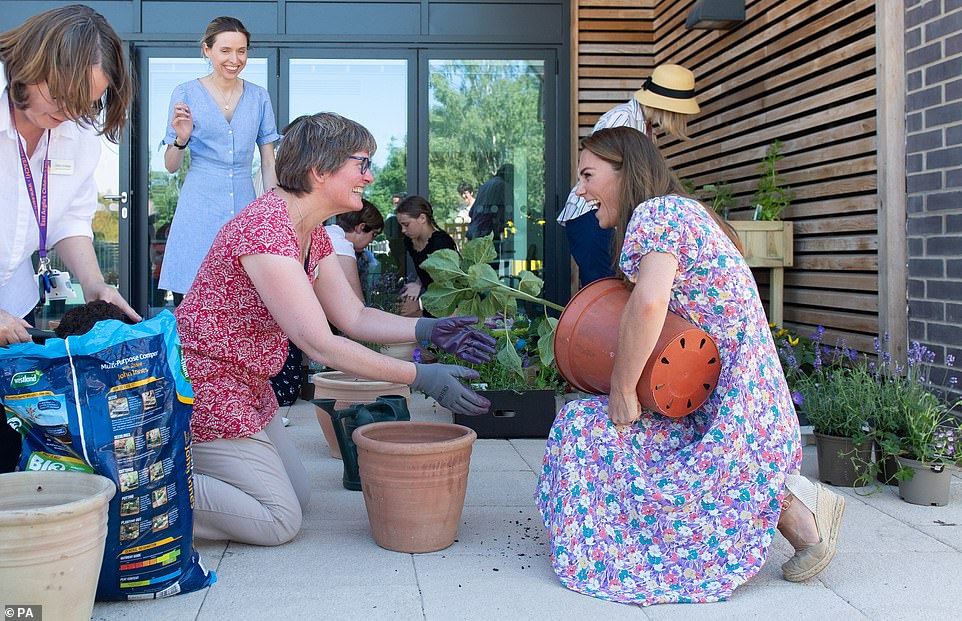 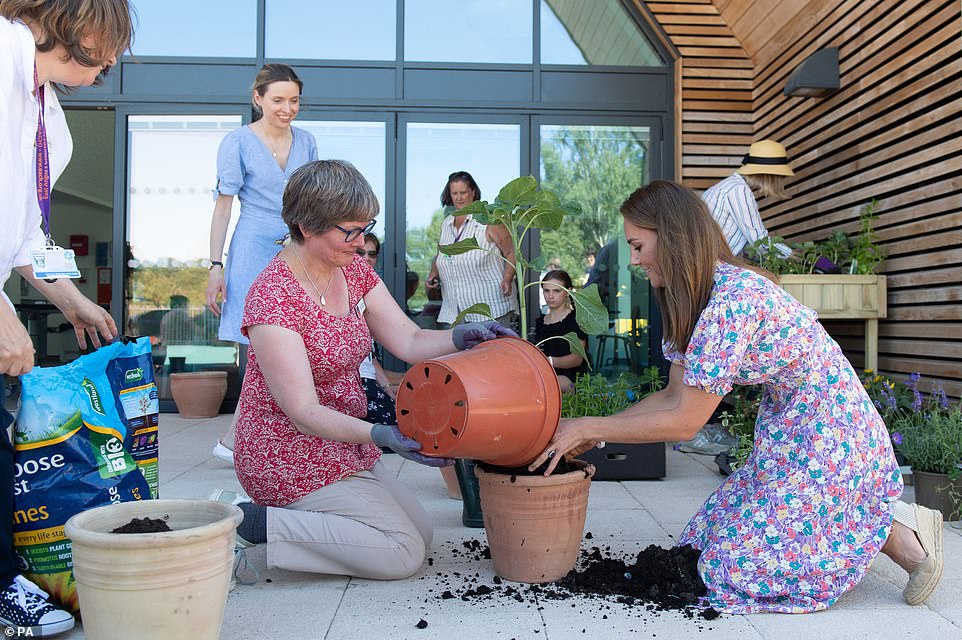 Soil fell onto Kate’s £180 dress, which is the first she has worn from Indonesian-based ethical company Faithfull the Brand 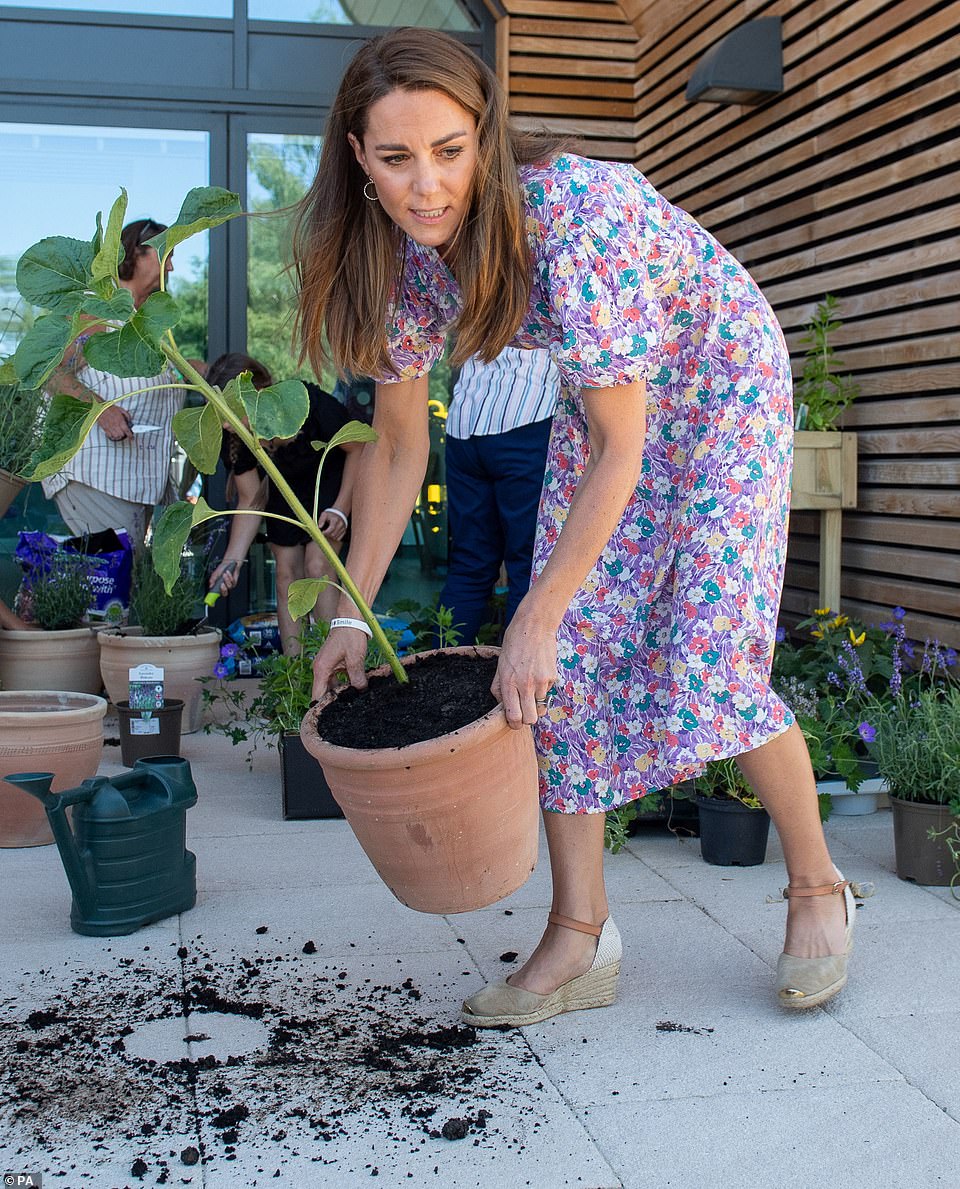 Her revelations that she and William ‘totally underestimated’ the impact of having their first child and that she ‘absolutely’ suffered from mum guilt reassured new parents who felt the same way.

An aide says: ‘Every member of the Royal Family has to find their niche, their groove. The Duchess has found hers. She brings together children, mental health and the outdoors in her own way. She is really enjoying her work and it shows.’

Her new confidence was on display during a visit to Fakenham garden centre, near the Cambridges’ Norfolk home, last week, when she struck up conversation with the customers, asking about their lockdown difficulties and revealing how that she was missing her own parents and siblings.

Meanwhile, her work on the garden at the nearby Nook hospice, combines many of her concerns.

She has a long-standing link with the centre, having spearheaded the £10 million fundraising campaign required to open it.

Tracy Rennie of East Anglia’s Children’s Hospices recalls her first meeting with Kate a decade ago. ‘It was a private visit and she was a little shy,’ she said, ‘but I remember a little girl running up to give her a hug and she immediately kicked off her high heels to play. Since then she has really blossomed and grown, finding her confidence in a very understated way.

‘Many people are put off coming to hospices as they worry it’s a place to die but actually it’s a place for support, fun and laughter.’ 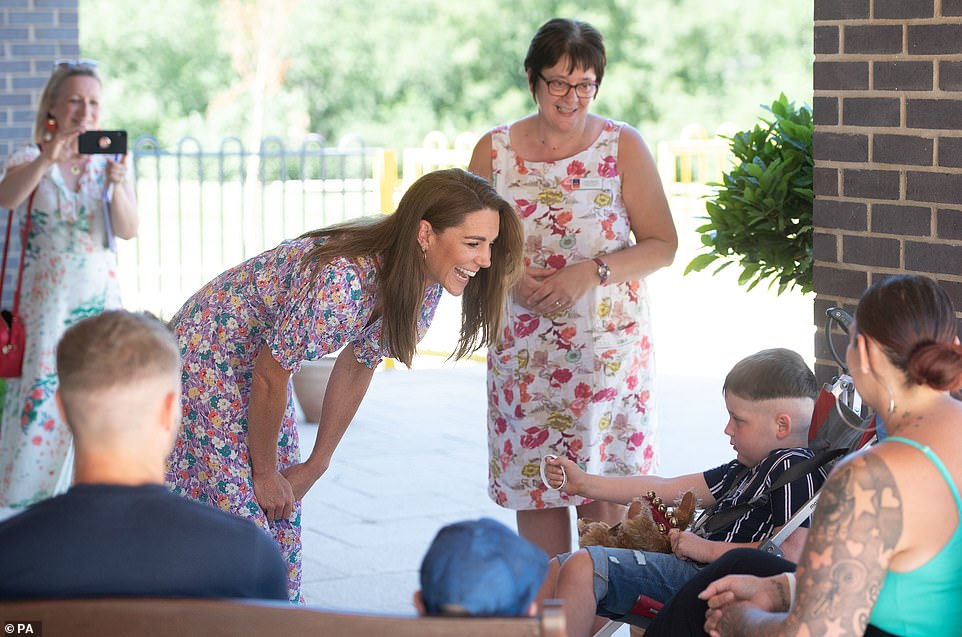 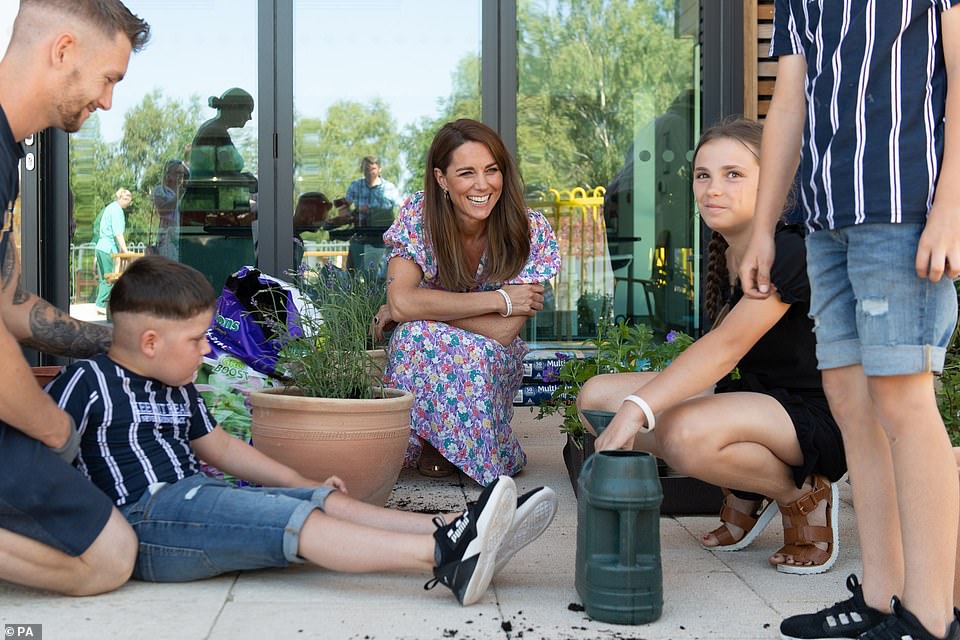 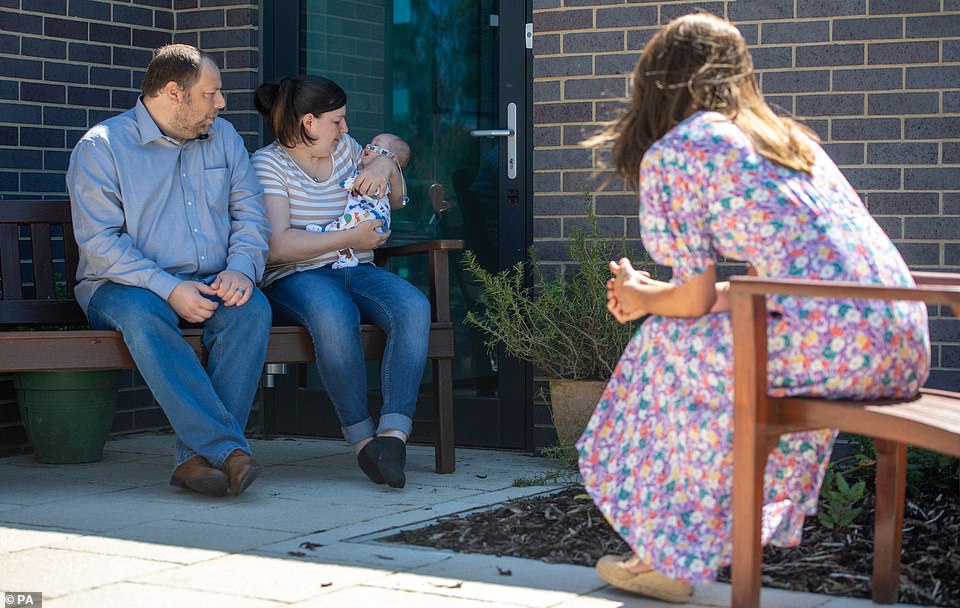 The hospice is currently looking after Connor Page, who was left brain damaged because of complications during his birth in early March. Mum Lisa, 32, said: ‘Every time people have said he won’t make it, Connor has proved them wrong. It has been very difficult. I’ve never cried so much in my life.’

Dad Liam, 40, added: ‘It’s the worst thing that any parent can go through. To look forward to holding your child and then for it all to explode. We’ve had a lot of support at the hospice, they have been absolutely fantastic.’

Sonny, who helped Kate plant the seeds, has also benefitted from the hospice. His mother Kelly, 31, told Kate how he had been a healthy boy but felt a little off-colour on his sixth birthday. She took him to see the GP and within days he had been diagnosed with an aggressive brain tumour.

‘It all happened quite quickly,’ repeated the Duchess, who looked visibly moved. She told the family: ‘I’m always so blown away by families like yours, particularly having to go through all of this in lockdown. You show such resilience and bravery. You’re such an inspiration.’

As she mucked in with the planting alongside Sonny and his sister Star, 11 and brother, Hudson, eight, Kate wore a bracelet which read ‘Sonny’s Smile’, a fundraising drive to grant him a trip to Disneyland Paris. Kelly said of her encounter with the Duchess: ‘I felt quite at ease as she’s so down to earth, the kids really loved doing the gardening and planting with her. We’ve had a really lovely day here.’