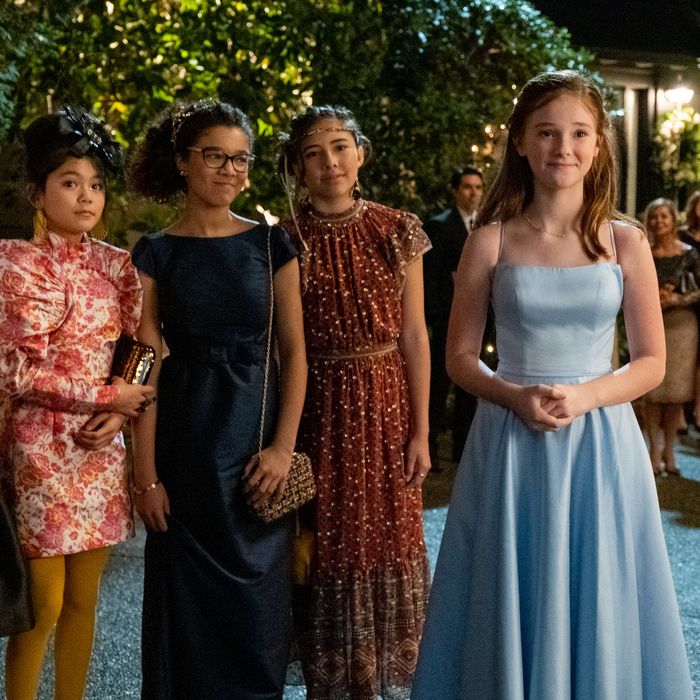 Has an episode of television ever felt like a giant, comforting bear hug as much as this one does? Twenty-four minutes that are just good for the soul. Sure, we have a two-part summer adventure to Camp Moosehead to close out the season, but the nuptials of Liz Thomas and Watson Brewer and the shenanigans that swirl around their big day feel like The Baby-Sitters Club coming full circle. Kristy trying to process her mom getting remarried and how that will change her family unit has been threaded throughout the season from episode one. Naturally, on the day of the wedding it finally comes to a head. For what are weddings without some low-stakes, happy and sad tear-inducing drama?

Kristy’s always been worried about how things will change once her fiercely independent, always-ALWAYS-check-the-price-tag kind of mother marries ― let’s not mince words ― the supremely loaded Watson Brewer. If Kristy’s honest with herself, most of that worry is more about how scary change is and less about the money or independence. (Her mom seems very secure in who she is.) If Kristy could remember what Dawn taught us a few episodes back, that parents are just older weirdos doing their best, then she’d realize that her mom is just as scared of change as she is and they could navigate those fears together. Instead: They fight.

On the morning of the wedding, Liz walks in to find Kristy looking beautiful in an icy-blue bridesmaid gown and flower crown. Yes, our Kristy! In a dress! Her mother is bowled over by her beauty, but is confused because the dress was supposed to be yellow. What she doesn’t know is that when Watson took Kristy for her final dress fitting (weird, but sure) and Kristy complained about how she looked like a banana, Watson offered to buy her a new dress even though this was nonrefundable. This is the second expensive “gift” Watson has bestowed on one of Liz’s kids without asking (he also bought Charlie a new BMW), so really her beef should be with her soon-to-be husband, but emotions are high and as Liz will later admit, she holds Kristy to a higher standard. The argument about who is being a spoiled princess devolves into Kristy shouting that she never wanted her mom to marry Watson and maybe she just shouldn’t be involved in the wedding ― or her “new, fancy family” ― at all. Those are words you can’t take back, and Kristy knows it as soon as they come flying out of her mouth.
During the ceremony, something magical happens (and I’m not just talking about two very nice people committing to one another for the long haul): Kristy sees her mother as an actual human being and not just “a mom,” and remembering the years of her mother being sad and stressed, realizes that of course her mother deserves to be happy and loved. Watson is a good man and their family will be stronger together. And then The Kristy Thomas, scoffer at the idea of adults crying when they’re happy, starts to cry tears of joy as her mother and Watson say “I do.” What a time to be alive, people!

All Kristy wants to do is have a minute alone with her mom to apologize and tell her how she really feels, but that is seemingly impossible at the reception. Kristy’s need for her mother becomes even more apparent when something else monumental happens: Kristy gets her first period. They didn’t name the episode Kristy’s Big Day for nothing. In lieu of her mother, however, she has her BSC girls, who have all been there and have a pad and instructions on how to use it ready to go. Kristy is having a day full of huge, meaningful realizations, including the fact that sure, she created the Baby-Sitters Club to take care of kids… “but also to take care of [her.]” They’re “more than a club, [they’re] best friends.” It’s just a group of hopeful, optimistic girls taking care of one another. Do not even look at me, DO NOT EVEN LOOK. I am a puddle of tears. People cry at weddings, okay?

In all the first period mayhem, Kristy almost misses her last chance to talk to her mom. Liz and Watson are driving off toward their honeymoon when Kristy runs out and the car abruptly stops and the two Thomas ladies finally take a moment to talk. It’s a gorgeous mother-daughter scene (the casting on this show is just so good all around and I’ll never stop talking about it) in which Kristy and Liz apologize to each other and admit that they are very much alike in all things. Liz also tells her daughter that even though she’s completely in love with Watson, she wants her to know that she still believes everything she’s tried to teach her: “You have to be independent and make it on your own. You are such a strong, little woman, Kristy,” she says, before reminding her that she is her “whole heart.” It’s just about as lovely a moment you could ask for and I would like it melted down into liquid form and added to my coffee every morning.

After all those feelings there really is only one thing left to do and our sitters already know this age old truth: It’s time to dance it out.

• What a delight to watch Richard and Sharon sweat it out knowing the wedding will be the first time they see each other since the Turtle Gift. Richard is a Champagne-guzzling wreck (okay, he only has a third of a glass, but that’s a lot for him) and Sharon is so excited to be back with him that she scarfs some cake with hazelnut, of which she is extremely allergic to. “Oh Richie, I’m just gonna stare at you until my left eye swells shut,” she says. These lovebirds! Get married already, would ya?

• Bless this show: Aunt Esme is the wedding officiant, which of course sets off Karen, who still believes Esme is a witch. As Esme explains, historically women were branded as witches when they refused “to conform to society’s expectations of who they should be.” “We’ve got a lot of witches here!” Esme shouts at the crowd. Snaps to that. Snaps all around!

• “We’re all children of divorce, Kristy.” Karen Brewer, telling it like it is.

• One second Stacey is sighing over missing Cousin Toby from Canada, the next she is dancing in the arms of Sam Thomas. The title of Boy-Crazy still remains safely with her.

• CLAUDIA KISHI IS A STYLE ICON. That dress! That eyeliner! I want to be her when I grow up.

Keep up with all the drama of your favorite shows!


By submitting your email, you agree to our Terms and Privacy Notice and to receive email correspondence from us.
News