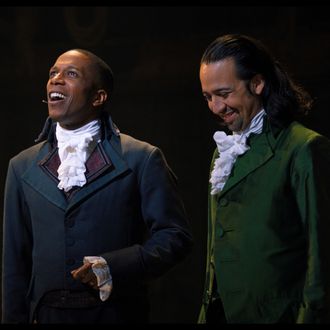 The Disney+ version of Hamilton will not be invited into the room where it happens.
Photo: Disney+

Could a filmed stage play, years removed from Broadway, start to stream the weekend of Independence Day, take advantage of a movie calendar in disarray, and find itself a surprise Oscar player anyway?

With the Academy changing its rules to allow streaming-only projects to compete at next year’s Oscars, a fascinating question has emerged: Does the Hamilton movie, the filmed version of a 2016 Broadway performance currently streaming on Disney+, now have a shot at Oscar glory? At first glance, the wording seems wide enough for the musical to sneak in: The Academy’s rule change was intended to protect films that had previously scheduled theatrical releases disrupted by the coronavirus, and wouldn’t you know it, this version of Hamilton was originally supposed to hit theaters in October 2021, before Disney and Lin-Manuel Miranda decided to debut it early as a July 4 present for viewers stuck in quarantine. (And because, with live theater across the world shut down, there was no longer any risk of cannibalizing Broadway revenue.) Could that be enough?

However, it appears that the Academy has in fact said no to this. Despite the various historical precedents that would seem to point toward Hamilton’s inclusion — most notably, the filmed version of Give ‘Em Hell, Harry, a one-man show about Harry Truman that earned a Best Actor nomination for James Whitmore at the 1976 Oscars — an AMPAS source says plainly that, as a recorded stage production, Hamilton is not eligible for awards consideration. (A 1997 rule change made such recordings ineligible.) As for the Golden Globes, the HFPA has not yet responded to a request for comment. Satisfied? Looks like Team Hamilton will just have to content themselves with the 11 Tonys, the Grammy, and the Pulitzer Prize.

If you subscribe to a service through our links, Vulture may earn an affiliate commission.