Machine Gun Kelly is setting social media aside as he bereaves the death of his father.

The rapper said as much in an emotional post on Sunday when he explained that he had originally meant to take the day to mark the one-year anniversary of his “Hotel Diablo” album but was overcome with somberness after learning his father, Richard Colson, had died.

“I had plans for the one year anniversary of Hotel Diablo today. that album was everything i wanted to say and i know it’s close to my fans…but my father took his last breath this morning, and ive never felt a pain this deep in my life,” Kelly – whose real name is Richard Colson Baker – wrote in his post, adding: “i’m setting my phone down. love you.”

The 30-year-old musician and actor had recently reconnected and made good with his father, a former missionary who had been in a Denver-area hospital for a non-coronavirus-related illness, according to the New York Times.

“It sucks because I really just want to just scream and cry and sit in my room and just wait for someone to come tell me it’s going to be all good,” Kelly told the outlet of the situation in an article published on Friday. He said his father had grown proud of him for picking up yet another instrument.

“He’s so stoked that I’m playing guitar now,” raved Kelly. “He called me the other day and told me that he’s really starting to enjoy my music. And he’s super proud of me.” 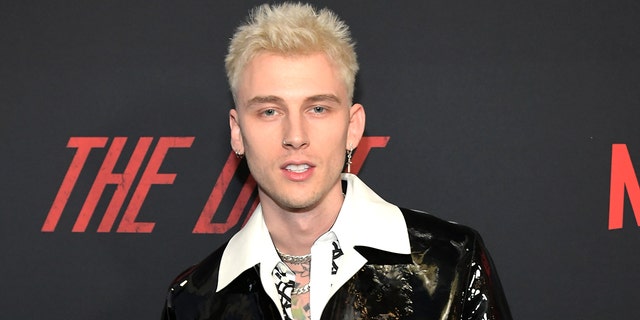 Machine Gun Kelly attends the premiere of Netflix’s ‘The Dirt” at the Arclight Hollywood on March 18, 2019, in Hollywood, Calif. (Photo by Charley Gallay/Getty Images for Netflix)

Kelly has recently been rumored to be forging a relationship with actress and model Megan Fox, who starred in a cameo in Kelly’s latest music video for “Bloody Valentine.”

Fox, 34, was married to actor Brian Austin Green for nearly a decade before the former pair announced their split in May.