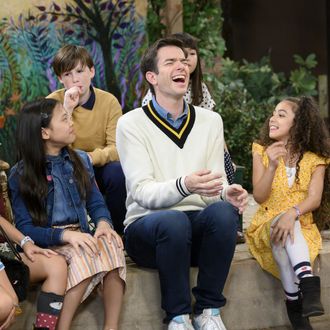 Thankfully, we haven’t seen the last of John Mulaney and his trusty Sack Lunch Bunch just yet. Comedy Central has revealed to Vulture that the stand-up comedian (and former Comedy Central intern!) has made a deal with the network, in which he will headline and executive-produce two more Sack Lunch Bunch specials. One will be an “upcoming holiday-themed special that will reunite the cast from the original hit special.”

The deal with Mulaney is part of a bigger reinvention of Comedy Central, one which will see the network focusing on original comedy movies, adult animation, and topical/point-of-view specials, often from big names such as Mulaney. While this deal doesn’t put Comedy Central back in the business of doing stand-up specials with Mulaney — he’s recently been very attached to Netflix — the fact that Comedy Central was willing to step up to make a deal with talent at Mulaney’s level is a sign the ViacomCBS-owned company remains serious about making premium content.

“I was an intern at Comedy Central when I was barely older than the kids in the Sack Lunch Bunch. I wasn’t a very good intern, so I am psyched,” Mulaney said in a press release. “They hired me again. We are thrilled to bring these specials to Comedy Central: a place where I have had so many good times.” Chris McCarthy, president of the ViacomCBS Entertainment and Youth group, said he hoped the deal ends up as “just the beginning of a long-standing partnership.”

Mulaney’s first Sack Lunch Bunch special debuted on Netflix in December 2019 and was, unsurprisingly for a Mulaney project, very good and funny. Time will tell what form the next two specials will take on Comedy Central, but here’s hoping for sequels to original hits such as “Plain Plate of Noodles,” “Grandma’s Boyfriend Paul,” and of course “I Saw a White Lady Standing on the Street Just Sobbing (and I Think About It Once a Week).”